Cashew industry is big but not strong

Cashew industry is big but not strong

In 2021, the cashew industry aims to export $3.6 billion, equivalent to an increase of 12.9% compared to 2020. Up to now, Vietnam has exported cashew kernels to more than 90 countries and territories, making up approx. 80% of the world’s cashew kernels export volume. However, the dependence on raw material areas is becoming a concern of cashew enterprises.

In the first quarter of 2021, cashew nut exports are estimated to reach 108 thousand tons and 634 million USD, increased 13.2% in volume but decreased 5.8% in value over the same period in 2020. Dependence on iported raw materials, meanwhile, Vietnam still mainly exports low-value processed cashew kernels, causing that the Vietnam’s cashew industry is evaluated as large but not strong.

The Vietnam Cashew Association said that in the first quarter of 2021, the cashew industry still exported well, increasing sharply in volume but the export price was lower than the first quarter of 2020, so the increase in export turnover was not equivalent to the increase of volume. There is a paradox that the export price of cashew kernels has not increased, but the import price of raw cashew nuts has still increased because the cashew processing capacity of cashew processing factories is too large, it is always in a state of “hungry” for raw materials. Therefore, leading to the fact that factories compete to buy raw materials. Meanwhile, the low export price of cashew is a consequence of the Covid-19 epidemic, which has made prices go down since last year.

The global consumption demand of cashew nut reached $9.94 billion in 2018 and is expected to reach $13.48 billion in 2024, with an average growth rate of 5.2% in the period 2018 – 2024. The above idea is based on the increasing market demand for healthy snacks, in which there is the increasing demand from EU countries and the increasing number of major processing facilities in Africa. 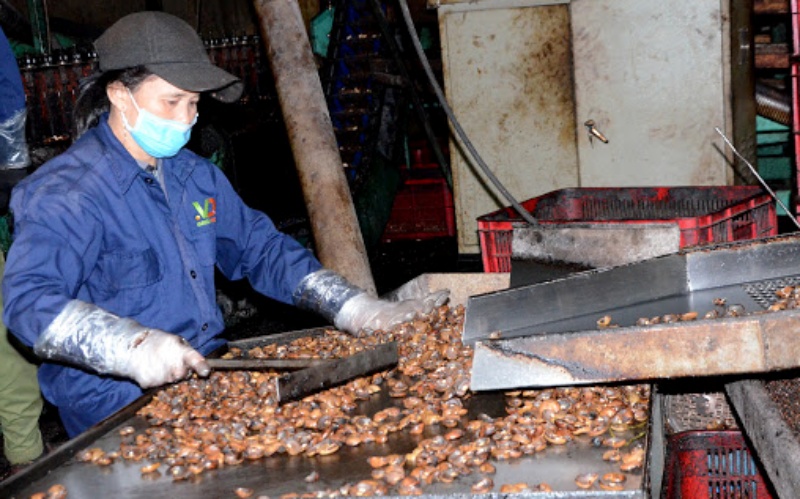 In the first quarter of 2021, the cashew industry still exported well, increasing sharply in volume but the export price was lower than the same period in 2020.

Increasing the value of cashew nuts by deep processing

Our country’s cashew kernel processing industry for export is under the great pressure from policies to support cashew growers and restrict the export of raw cashew nuts of African countries such as Ivory Coast, Tanzania… Meanwhile, the large cashew consuming markets in the world such as India and China are also applying policies to limit the volume of cashew kernels imported from Vietnam.

Mr. Pham Van Cong, Chairman of the Vietnam Cashew Association said: The biggest advantage of Vietnam’s cashew industry is the world’s most mordern processing technology produced by Vietnamese people. However, this is not enough. To overcome the above difficulties and challenges, the cashew industry needs a methodical strategy to increase the value of cashew nuts, switching from preliminarily processing cashew kernels and exporting semi-finished products to generating processed finished products, going directly to supermarkets.