It is time for the cashew industry to have a strong enough force to be able to “take control” and hold the power to dominate prices of the commodity that Vietnam is leading in the world’s processing and export process. 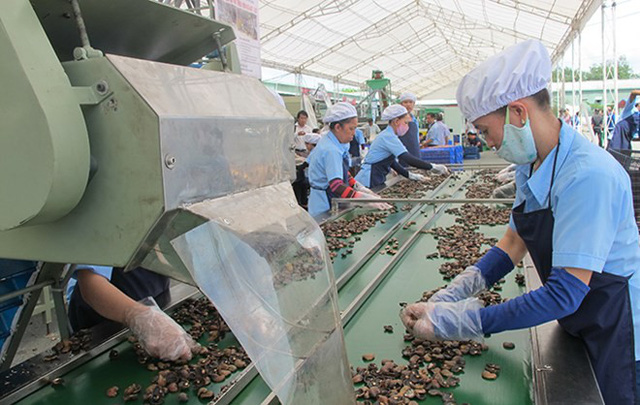 According to statistics of the Ministry of Industry and Trade, in the first 5 months of 2018, Vietnam’s cashew kernel exports increased in both volume and value compared to the same period in 2017.

According to the analysis of the Vietnam Cashew Association (Vinacas), the price of cashew kernels dropped sharply mainly due to the massive growth of domestic production in a very short time. The processed volume increased so “hot”, so enterprises competed to sell, many of them sold their products at cost price, even lower than the cost price. A broker said that US importers themselves were also concerned about the fact that the price of Vietnam’s cashew kernels dropped too quickly, goods are imported too much for selling, pushing distributors into losses.

Mr. Tran Van Hiep, Member of Standing Committee of Vinacas  said that when identifying the down trending of price, cashew enterprises are racing to produce faster and lower the selling price to get “out of goods” soon. As for European and American buyers – with the effective support of local brokers – quickly updated the “weaknesses” of cashew enterprises; such as raw material difficulties, debt pressure or unstable psychology. Therefore, they only buy very “slowly” to force prices, “Vietnamese cashew enterprises lose at their “home court” themselves.

So Vietnam’s cashew kernel has been depreciated due to the local supply-demand imbalance, while the long-term world’s demand still increases steadily – “the sea is still full of fish”. The proof is that the goods are sold out after being produced. The inventory volume of cashew kernel at many enterprises is almost at a very low level. Therefore, perhaps the time has come for the cashew industry to need to have a strong enough force to be able to “take control” and hold the power to dominate prices of the commodity that Vietnam is leading in the world’s processing and export process.

Currently, it is estimated that Vietnam has thousands of large and small cashew processing factories; in particularly, in the cashew capital – Binh Phuoc has more than 600 enterprises. The processing capacity of a small facility can also reach 10 tons/day. Meanwhile, in order to “keep goods to maintain prices”, enterprises must have very good processing technology. In fact, currently, most cashew enterprises are only in small and medium-scale, even super-small-scale, the investment in equipment and technology is only at the “medium level”, and always face the pressure of quick capital turnover to reduce financial costs.

Therefore, the “call” of Vinacas has not received a strong enough response so that Vietnamese cashew nuts can take the upper hand when exporting to foreign countries. Each enterprise has its own business plan, the Association can only call on enterprises to respond to the general policy, but does not have the right to order member enterprises.

According to Mr. Nguyen Duc Thanh, Chairman of Vinacas, if the business suffers one, farmers suffer ten times, especially at times when the domestic cashew price fails like this year. The representative of Vinacas also said that “Vietnam needs very large leading enterprises that can gather the strength of many small enterprises in the industry, in charge of import and export, raw material procurement and distribution in the domestic and also foreign markets in order to dominate the trader’s link, so the sustainable position of the cashew industry can be strengthened, but as currently, no one can rescue it.

According to a forecast from the International Nut and Dried Fruit Council (INC), the global cashew production of this year will increase slightly by about 4% compared to 2017, reaching about 3.45 million tons. Thanks to the low price, the consumption of cashew kernels will also increase from 3.5 to 5%.

Currently, one of the major rivals of Vietnam’s cashew industry, India, is also in a similar temporary predicament. There is information that the cashew capital of India had to ask the government to “rescue” because its enterprises could not solve the problem of lacking raw materials and facing the pressure from bank interest rates.

From the commercial perspective, the above information is generally invisible to open opportunities for Vietnam’s cashew industry in the end of the year.

Vinacas also believes that although the export volume of cashew kernels this year may only be on par with last year’s (350 thousand tons), the turnover can still inched up to $ 3.7 billion, helping Vietnam continue to maintain its 1st position of the world for the 13th consecutive year in terms of cashew kernel exports. It is forecasted that next year (2019), Vietnam’s cashew industry will enter a new development cycle, with the export turnover may reach 4 billion USD.